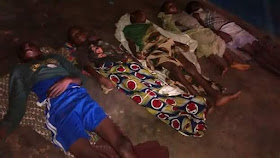 5 out of a family of nine has been reported dead in a community in Imo State after eating a pot of Jollof rice prepared by their mother.

The list of those suspected to have eaten the food include Mr. Vitalis Nwosu and his wife Mrs Obianauju and their three children, Master Chinonso Nwosu both students of Obollo Secondary School and Master Odimnachi  Nwosu, a primary five pupil of community school Obollo.

Reports from the community say that Mrs Obianauju on the ill fated day June 17 cooked a pot of Jollof rice for dinner and served the family.  But shortly after eating all of them started vomiting, with stomach ache, pains and stooling.

The children were rushed to nearby hospital including their parents’ . Every effort made by the doctor to revive them proved abortive.The victims later moved to a better Hospital in Owerri  yet  there were no positive result.

After they were confirmed dead by the doctor,their dead bodies were deposited at the mortuary while investigation on the cause of the death continued.

Kinsmen who spoke to our reporter lamented that it is a horrible situationadding that it was a hand work of enemies.

Meanwhile,police has began massive arrest on the matter as many out of fear of arrest flee the place to neighbouring communities. When contacted on phone,the Police Public Relations Officer,PPRO,Imo state Command confirmed the story.

Over Familiarity: One reason why you may still be single

What you need to know about newly-nominated CBN Deputy governor Edward...

2baba, Gospel on the Beat, Others to Speak at first Imo...

Olamide was the only artist who gave financial assistance to Majek...