A whistleblowing Chinese doctor who tried to raise the alarm about the coronavirus outbreak has died, a Communist party-controlled newspaper has confirmed.

Li Wenliang, 34, was declared dead at 2.58am local time on Friday morning after “emergency treatment” at a hospital in Wuhan, the Global Times reported, following hours of confusion over his fate. 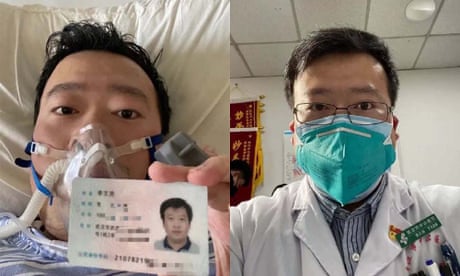 Earlier reports of Li’s death had triggered an outpouring of grief and anger on Chinese social media, with many hailing his decision to speak out over the virus despite the risks of doing so in his authoritarian country.

The Global Times was among the heavily controlled state-run newspapers that stepped back from their initial reports of the ophthalmologist‘s death on Thursday.

“We profoundly regret and mourn this death,” the Wuhan City central hospital said in a brief statement on its official social media account.

Chinese police had targeted Li for “spreading rumours” in late December 2019 after he posted a warning on social media about a cluster of cases of a flu-like disease that had been treated at his hospital.

Seven patients were in quarantine and the disease symptoms reminded him of Sars (severe acute respiratory syndrome), he said. He urged colleagues to wear protective clothing at work.

Four days later he was summoned to the local public security bureau, accused of “making false comments” and disturbing the social order. He was told that if he continued to talk about the disease, he would be “brought to justice”.

Li was one of eight people authorities targeted for “sharing false information”, in a heavy-handed approach that China’s supreme court later criticised. He agreed not to discuss his concerns in public again.

But in early January he treated a woman with glaucoma without realising she was also a coronavirus patient; he appears to have been infected during the operation.

On 10 January, when China was still insisting there had been no new cases for a week, he started coughing then developed a fever. Two days later he was in hospital; his parents also fell ill.

Li broke his silence to give interviews from his hospital bed.

“If the officials had disclosed information about the epidemic earlier, I think it would have been a lot better. There should be more openness and transparency,” he told the New York Times.

The death toll from the coronavirus outbreak in China reached 563 on Thursday, as health experts prepared to meet in Geneva next week in an attempt to develop a vaccine.

Chinese authorities said the death toll had risen by 73 in the previous 24 hours – the third record daily rise in a row – with 70 of the deaths recorded in Hubei province, the centre of the outbreak.

There are more than 28,000 cases in China, according to health officials. The youngest patient is a baby born on Saturday in Wuhan and confirmed positive just 36 hours after birth. The baby was immediately separated from the mother after the birth.

The World Health Organization (WHO), however, said on Thursday that while it was too early to say that China’s coronavirus outbreak was peaking, Wednesday was the first day that the overall number of new cases in China had dropped. WHO official Mike Ryan said there had been a constant increase in cases in Hubei province but that had not been seen in other provinces.

In Wuhan, the largest city in Hubei, hospitals were struggling to find enough beds for patients. A 1,500-bed hospital opened on Thursday, just days after a 1,000-bed hospital with prefabricated wards and isolation rooms began taking patients, but senior officials said the city of 11 million was close to capacity with only 8,254 beds for 8,182 coronavirus patients.

Outside mainland China, at least 230 cases have been confirmed, including two deaths, one in Hong Kong and another in the Philippines.

On Thursday the UK confirmed a third case, while Japan confirmed another 10 infections among 3,700 passengers and crew stuck onboard the Diamond Princess, a cruise ship moored off the port of Yokohama, near Tokyo.

The 10 new cases involved four people from Japan, two each from the US and Canada, and one each from New Zealand and Taiwan, the health ministry said, adding that five were in their 70s, four in their 60s and one in their 50s.

Japanese health officials now have the results of 102 tests conducted on 273 passengers and crew who complained of feeling unwell or had been in close contact with a man in his 80s who disembarked late last month and tested positive on his return home to Hong Kong.

TV footage showed the vessel arriving at Yokohama port to take on food and other supplies and hand over the infected patients, who are being treated at hospitals in the Yokohama area. Port officials could be seen dressed in white full-body protective suits, face masks and helmets.

The WHO is asking for $675m to stop the outbreak. Its director general, Tedros Adhanom Ghebreyesus, acknowledged that the sum was large, but said it was “much less than the bill we will face if we do not invest in preparedness now”.

Li’s fate has echoes of Carlo Urbani, an Italian doctor who in 2003 played a crucial role in identifying Sars and raising the international alarm, but was eventually killed by it.

Working for the WHO in Hanoi, Vietnam, he was called to a hospital when a patient arrived from Hong Kong with unusual pneumonia symptoms. He recognised the disease was highly contagious, brought in strict controls and called in international health authorities. His action led to the WHO raising a worldwide alert about the disease and halted its spread in Vietnam.

Songs of Praise : Mourinho praise Alderweireld despite own goal

Lampard wants his lads to improve on matchdays

37 APC House of Reps Members Defect to PDP and ADC

FIFA Ranking: Nigeria drop to 39th in the world and 6th...

10 things you must try before giving up on your marriage

5 signs your ex wants you back

All You Need to Know About CBN’s New Guidelines for Financial...

“If I win the next election and I survive the next...

Songs of Praise : Mourinho praise Alderweireld despite own goal

Lampard wants his lads to improve on matchdays