A former governor of Imo, Rochas Okorocha, has cried out over an alleged plot by some politicians in the state to oust him from the Senate.

Okorocha on Wednesday, March 3, claimed that stakeholders of the Imo West senatorial district, working under the umbrella of Orlu Political Consultative Assembly (OPOCA), have commenced moves to recall him from the upper chamber.

The senator, questioning the motive behind this plot concluded that it is borne out of the selfish desire to make money. 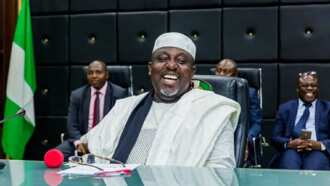 Okorocha said those behind the plot to recall him from the Senate are political criminals.

Onwuemeodo recalled members of the OPOCA were behind the downfall of Arthur Nzeribe in a bid to please Chief Achike Udenwa, a former Imo governor.

“A group known as Orlu Political Consultative Assembly (OPOCA), has told its audience that it was going to recall the senator representing Imo West senatorial district, Owelle Rochas Okorocha from the Senate.

“Those behind OPOCA are political undertakers who glory in absurdities, simply to enlarge their coast or make their leaking pockets fat. And not just for any meaningful venture, but for leisure and pleasure.

“Those behind OPOCA are political undertakers who glory in absurdities, simply to enlarge their coast or make their leaking pockets fat.”

MEANWHILE, it’s been reported that Okorocha had been arrested. He was arrested for daring Governor Hope Uzodimma, his successor, to reopen the Royal Palm Estate which was sealed by the state government.

See what Nigerians are saying about Buhari’s promise to help Ghana...

Huawei sacked 100 of its engineers due to Etisalat Nigeria Crisis

How to handle Violence in Relationship