ADVERTISEMENT
Bongo music is king in Owerri, so much that Afro pop musicians in the city hang out with Bongo musicians in order to get popular in the state.
Sometime in March, I went to the Bongo Center/Square in Owerri in search of content, there I met Sauw Blaze, an upcoming Afro pop musician. I was surprised when he gave me a copy of his album. I said to myself, you have an album already? Awesome! We engaged in conversation and the outcome can only be imagined. He’s a great guy with great dreams
‘Walawala’ his latest single is a pure Bongo sound. He layered high tempo vocals across a mid tempo sound and served it in Igbo language just the way it is done in Bongo music. Great song!
He managed to refine it though to fit into his genre of music- Afro pop. What a genius he is! But that song needed more refining to fit in perfectly as an Afro pop sound.
That’s where Sauw Blaze failed. The production was shalow. It needed more than just the beat and guitar sounds in it to be perfect. Better mixing, better mastering and a better production would have done the magic. But it’s a start of a very long journey and Sauw Blaze can take correction along the line to produce better music. Every musician does that. 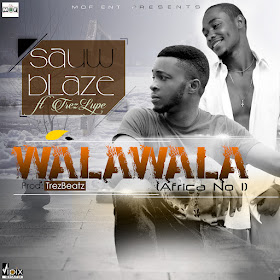 A song he said is for every hustler trying to live their dreams and it was produced by Trez Lupe (TrezBeatz) who was also featured in the song.You would definitely want to listen to this.
Download: Walawala – Sauw Blaze ft. Trez Lupe

WATCH: “I respect what Wizkid does” – Jeezy on #EverydayStruggle

“I think Serena hated me for being the skinny kid who...

Pick Your Fave: Johnny Drille and Simi’s “Hallelujah” or Tiwa...

#NoShakingCarryGo: Tekno Miles and Pepsi are playing with you and I

Veteran Nollywood actor Sadiq Daba is back in Nigeria!