Ultima Studios (Ultima) is excited to announce that it is bringing the world’s number one business reality television show, Lions’ Den back to Nigeria! The programme’s journey back to Nigerian TV screens started last week in London, when Ultima’s Chairman/CEO, Femi Ayeni, signed an agreement with UK-based Sony Pictures Television (SPT) to produce the Nigerian version of Lions’ Den. 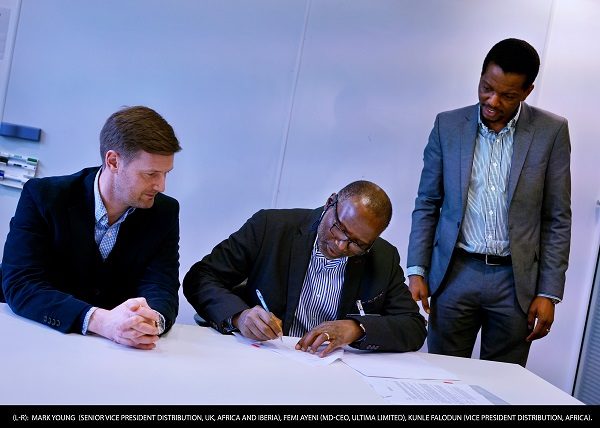 Today, most people will know the show as Dragons’ Den (UK) and Shark Tank (US). However, the format, created by Japan’s Nippon TV, originally aired in Japan in 2001 as “Money Tigers”. It emerged in the UK two years later, and the UK version has been the longest running adaptation, currently in its 15th season. In 2009, the Dragons became Sharks, and the US version, Shark Tank started. Shark Tank has now been made in the US, Australia, Portugal, Italy, Mexico, South Africa, Brazil, Mongolia and Vietnam.

Over the 17 years since it first launched, the show has become a global phenomenon with the format selling into more than 35 territories across all continents of the world. It has won multiple awards in every country in which it has aired, including the prestigious Emmy Award in the US for Outstanding Structured Reality Programme (4 consecutive years); the Annual Critics’ Choice Award in the US for Best Reality Series (3 consecutive years) and in the UK, the Royal Television Society North West Awards (5 times) in different categories.

The basic format of the show is that entrepreneurs pitch bold new ideas and inventions to five millionaires, the investors, in search of investments to fund the growth of their business ideas. The entrepreneurs must convince one or more of the investors to invest a specific amount of their money, or they fail. They will need to prove themselves with hard facts and figures, and answer the investors probing questions. If the investors are impressed by a pitch, they negotiate aggressively to own the biggest possible share in the venture in exchange for cash. The show makes compelling viewing, especially when the investors start competing with each other to be the sole investor in a truly promising venture.

Many entrepreneurs have made success of their business ideas after appearing on the show. Two that come to mind are the sponge company that has become the biggest “Shark Tank” success story. Over the past 3 years, Scrub Daddy has brought in a total of $75 million in revenue. When the founder and CEO, Aaron Krause came on the show, the company had struggled to reach $100,000 in sales over 18 months. The Shark that invested saw great potential in the company and she helped Krause to expand his product line and exposed them to retail outlets where they’ve become best sellers. And in the UK, Levi Roots is widely considered the biggest ever success on Dragons’ Den after his Reggae Reggae Sauce became a store cupboard staple. Big supermarket chain – Sainsbury’s was bowled over by the level of demand for the tasty condiment when it first went on sale, as it sold in a single week what it was expected to shift in a year!

Why is Ultima bringing the show to Nigeria?

Ultima’s choice of Lions’ Den as its next venture is a celebration of the entrepreneurial spirit for which Nigerians are famous. Ultima is excited to produce a programme that will not only provide exciting viewing for viewers at home; but will also provide an opportunity for serious entrepreneurs to attract much-needed investments. Furthermore, as has been the case in all other countries where the show is running, it is not just the entrepreneurs but also the viewers at home that will benefit from the comments made by the Lions.

Mark Young, Senior Vice President, UK, Iberia & Africa Distribution, Sony Pictures Television said: ‘SPT already have a fantastic and longstanding relationship with Ultima Limited and we are thrilled to be working alongside them once more to bring Lion’s Den back to Nigeria. Ultima and SPT have had great success working together on Nigeria’s longest-running reality show ‘Who Wants to be a Millionaire’ and we look forward to continuing to develop many more exciting projects in the future.

Ultima Limited is the leading reality television programmes producer in West Africa, best known for its flagship programs – “Who Wants To Be A Millionaire?” and “Project Fame West Africa”. Ultima produced 14 seasons of “Who Wants To Be A Millionaire?”, making the multi-award winning programme the longest-running reality show in Nigeria. Ultima also produced 9 seasons of “Project Fame West Africa”, also a multi-award winning programme that remains the longest running music reality show in Nigeria.

Sony Pictures Television (SPT) is one of the television industry’s leading content providers, producing and distributing programming worldwide in every genre and for every platform. In addition to managing one of the industry’s largest libraries of award-winning feature films, television shows and formats, SPT is home to a thriving global production business operating 21 wholly-owned or joint venture production companies in 12 countries around the world. Sony Pictures Television is a Sony Pictures Entertainment Company.

The Imo State Governor, Hope Uzodinma has revealed that he was the one that brought soldiers into the Orlu community of the state.

These Pre Wedding Photos of Egbeigwe Apama and his Bride Will...

Check out the Artistes that Performed at the just Concluded Coachella...

Too much pressure was on Messi to deliver and it affected...

Everything That Happened On Music Critique 101 Last Saturday On Zanders...

Smoothies: A Load Of Nourishment